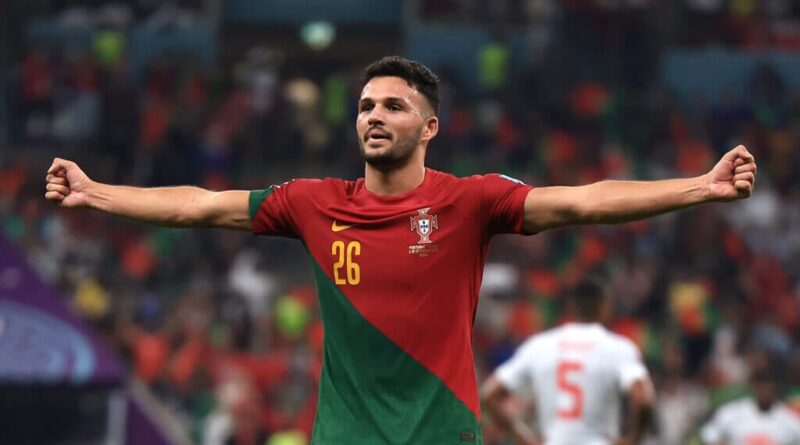 When the new update arrives after the January transfer window, players who impressed in Qatar will likely cost more and could be playing for new teams.

We’ve highlighted 10 of the most impressive players from the 2022 World Cup and, using FM23, devised a formula to predict how they might perform if they end up in the Premier League.

After burning the midnight oil to conduct more than 200 scouting reports involving all 20 Premier League teams, here’s what we found out about each player:

Price = the approximate price at the start of a new save in FM23 before any World Cup bump.

Current ability = every player has a rating out of five, with five being the best and one being the worst. A bigger team may view a player as only being a three-star prospect but at a smaller side, the same player might be a four-star prospect. The figures are for each player’s current ability average across all 20 Premier League teams. 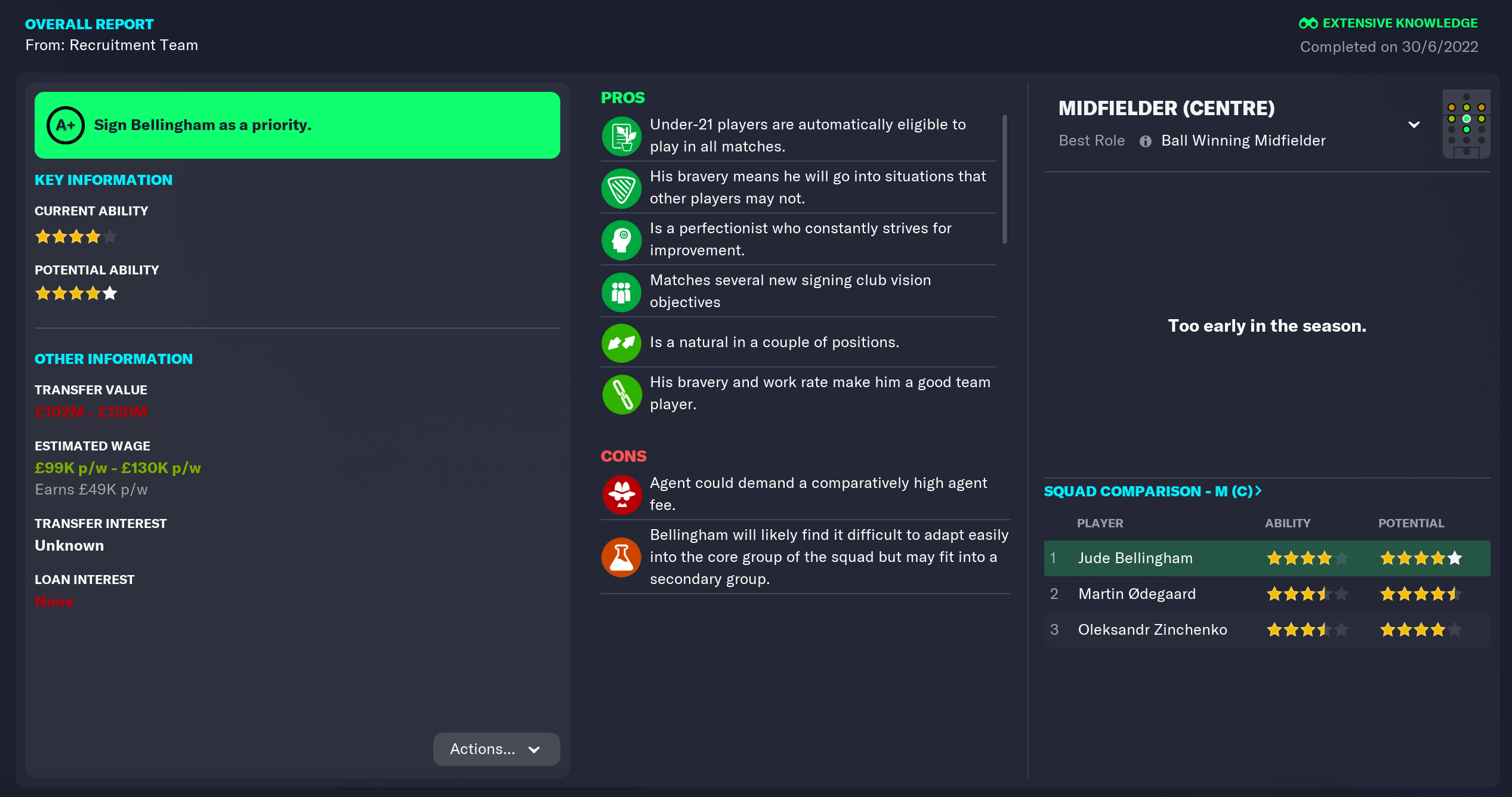 An example of a scouting report in FM23

Potential ability = similar to the above, only here we look at what a player may become, rather than how good they are now. We chose to use scouting report rankings, instead of the current and potential ability figure assigned to every player in FM23 (which is ranked from 0-200), as our focus is n how good each player is perceived to be by different Premier League teams, rather than their overall ability.

Position rank = FM23 ranks each player at their position, with one being the highest. This allows us to contextualise each player’s role in the depth chart. By creating an average for all 20 Premier League teams, we’re able to get an approximate look at if the players in question are more likely to start or warm the bench.

Here’s how 10 of the best players at the 2022 World Cup might perform in the Premier League.

The former Birmingham icon, whose shirt number was retired by his boyhood side at the age of just 17, needs no introduction. When it comes to how he might fit in at a top side, however, things are a little less clear.

All 20 scouting reports state that the England midfielder is a five-star prospect, which is about as definitive as it gets. In FM23, you’ll often see some players earmarked as having five-star potential who never end up fulfilling that prediction, but when 20 teams all provide the same outcome, you can take their word for it.

However, only a handful of clubs could realistically afford Bellingham. In real life, as David Ornstein reports, Liverpool, Chelsea, Man City and Real Madrid look likely to battle it out.

With three goals in Qatar, Gakpo added substance to the attention he received prior to the tournament. But he’d only be the third-best left-winger on average at each Premier League team in FM23.

All 20 clubs consider him to be a four-star prospect at minimum, which is impressive. For context, Luis Diaz is a four-star rated prospect in FM23, while Bernardo Silva is rated at four and a half stars. In a nutshell, he could become the leading winger for the majority of teams or a reliable starter rotated by clubs competing for titles.

James Maddison, Allan Saint-Maximin, Leandro Trossard, Jarrod Bowen and Goncalo Guedes are rated higher than Gakpo in the game, which explains why he wouldn’t necessarily be an unquestioned starter. Manchester United have been linked with him in real life, but in FM23, he’d only be their fifth-best winger.

United don’t have five left-wingers, but FM23 ranks players who could play there if needed: Jadon Sancho, Marcus Rashford, Bruno Fernandes and Christian Eriksen are seen as better options on the left than Gakpo, but in reality, he’d only be behind Sancho and Rashford in the pecking order.

At 27, it’s what you see is what you get with Livakovic. He’s unlikely to improve significantly, but for 11 Premier League sides, Livakovic would be their best option as goalkeeper. Arsenal, Aston Villa, Bournemouth, Chelsea, Everton, Liverpool, Manchester City, Manchester United and Tottenham all have goalkeepers with superior statistics.

Bournemouth have former Barcelona and Juventus shot-stopper Neto in goal, Everton have Jordan Pickford and Aston Villa have Emiliano Martinez. Those three are anomalies. The other six with better goalkeepers are either title contenders or begin each season with the aim of qualifying for the Champions League.

Because of Morocco’s run at the World Cup, Fiorentina will want at least €20million to sign Amrabat in real life.

If Fiorentina’s asking price holds true, it creates an interesting dilemma. Most of the teams who might want to spend €20million (£17.2m, $21.3m) on him wouldn’t consider him an immediate starter.

Amrabat would only be the first-choice option at Bournemouth and Crystal Palace. At the other end of the spectrum, he’d be the seventh-best option at Aston Villa in his position, fifth-best at Tottenham and 10th-best at Liverpool.

The Moroccan would be the second-best defensive midfielder if he were to join Brentford, Everton, Fulham, Leeds, Newcastle, Nottingham Forest or Southampton. A move to Palace, Bournemouth, or one of the seven sides who view him as a secondary option in FM23, would appear to be a sensible move.

All but one of the 20 Premier League teams consider Gvardiol to be a five-star prospect, with Liverpool the exception — they view him as a four-and-a-half-star prospect.

Capable of filling in at left-back, Gvardiol’s scout reports are somewhat skewed. FM23 considers him more of a left-back but in real life, he’s been playing in central defence for Croatia. That may explain why his position rank is so low for someone whose viewed as having such high potential.

With scouting reports, FM23 groups players who could play in that position if need be. Arsenal are said to have six players who can fill at centre-back with higher attributes than Gvardiol, but in reality, Takehiro Tomiyasu and Kieran Tierney are unlikely to play there often. Likewise, there is also an argument to be made that Chelsea don’t have seven players capable of playing at centre-back, despite the scouting report on FM23.

In the summer, RB Leipzig wanted a fee of around €90million for Gvardiol from Chelsea, while some reports suggest he has a release clause as low as £43.6million.

Of the teams who could likely afford him, Chelsea, who saw a deal for the Croatian defender collapse in the last transfer window, represent one possible destination, while Arsenal and Tottenham could also offer Gvardiol to the prospect of European football.

If a player replaces the most prolific goalscorer in the history of international football and scores a hat-trick at a World Cup while doing so, their profile will rise. In other words, Ramos’s price point of about £13million in FM23 may now be too low.

However, despite starting in place of Cristiano Ronaldo in the last 16 for Portugal, there is a discrepancy between Ramos’ attributes in FM23 and the expectations that may follow his hat-trick in Qatar.

On average, he’d be the third-choice starter for a Premier League side. However, Bournemouth, Crystal Palace and Nottingham Forest have strikers with inferior statistics to Ramos, which means he could become the undisputed starter at any of those three clubs.

On the flip side, Manchester City, Chelsea and Liverpool only view him as a player with three-and-a-half-star potential. Manchester United, Arsenal and Tottenham view him as a four-star prospect. Those predictions point towards him being a striker who will develop into a solid option, but perhaps not one of the very best in the world.

FM23 tells us that Depay would be the undisputed starter at 15 Premier League clubs. Arsenal (second-best option at left-wing), Chelsea (third-best), Liverpool (third-best option), Manchester City (fifth-best) and Tottenham (fourth-best) are the only outliers.

Carl Anka laid out a case for Manchester United to sign Depay ahead of Gakpo here, and if the Dutch forward does rejoin his former side, he’d arrive with the best attributes of any left-winger. He is considered a four-star player at United, but only a three-and-a-half-star player at Arsenal and Tottenham and just a three-star prospect at City, Chelsea and Liverpool.

His attributes in FM23 make him a reliable addition for any side that can afford him, even if the opinion around him differs from team to team.

Considering his price point, potentially high wages and likely desire to only play for another top side, Manchester United appear to be the best fit for him of all Premier League teams according to FM23.

Fernandez is proving an undeniable force. The midfielder has gone from being loaned out at River Plate to starting most of Benfica’s games in the Champions League to one of Argentina’s brightest sparks at Qatar 2022.

Having only joined Benfica this past summer, departing in January seems unlikely, but not out of the question. If he was to move, he would be third on average in the depth chart for centre-midfielders in the Premier League.

However, Fernandez’s potential is among his biggest selling points. Every Premier League team apart from Manchester City and Chelsea consider him to have four-and-a-half-star or five-star potential; City and Chelsea see him as a four-star prospect, the same current ability as Thiago and one star more than Jordan Henderson in FM23.

Ounahi, who plays for Angers, a French team currently bottom in Ligue 1, has interest from clubs in the Premier League, La Liga and Bundesliga after featuring for Morocco at the World Cup. Angers’ chairman said they will “study all serious proposals for a possible transfer”.

Should the Moroccan move to the Premier League, FM23 tells us that he would be eighth in the depth chart on average. That statistic indicates he wouldn’t be a likely starter or even the first person called off the bench, but context is crucial here. After his displays in Qatar, his attributes after the next FM update will likely be higher.

In the meantime, Wolves (fourth-best centre-midfield option) and Fulham (fifth-best) appear to offer the best route to first-team football in the immediate future.

On the upside, Ounahi has three-and-a-half-star potential overall and is still just 22 years old, which means he could eventually develop into a reliable starting option in the Premier League.

Juranovic has been a potent force for Croatia at the World Cup, patrolling the right flank as if he’s trying to get a high score on a bleep test. His displays have caught the eye of the wider public, but in FM23, 19 of 20 Premier League teams already have a right-back on their books with better attributes.

The Celtic defender is 26, so is unlikely to improve a great deal, but a look at his in-game attributes indicates an industrious wing-back who ticks most boxes. Bournemouth are the only team in FM23 that don’t have an option already better than Juranovic.

If he were to join Brentford, he would be the second-best right-back, but outside of that, his average position on the depth chart is fourth.

The caveat is FM23 grouping players capable of filling a certain position, even if they don’t play there often, but if the 200 scouting reports we carried out are to be believed, Juranovic may be better off staying at Celtic. 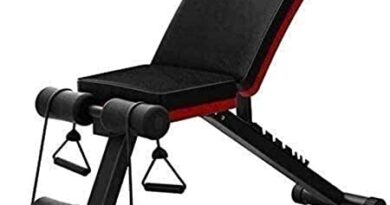 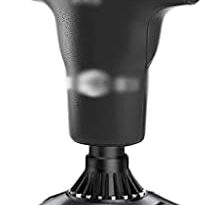