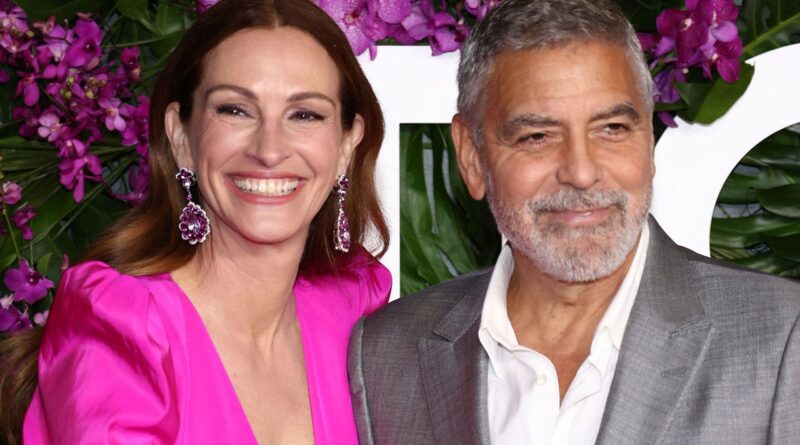 
Julia Roberts’ love for her close friend and frequent co-star George Clooney was on full display at the Kennedy Center Honors gala earlier this month.

The 55-year-old actress was decked out in a gown plastered with photos of the 61-year-old actor when she took the stage at the ceremony honoring Clooney in Washington D.C., on Dec. 4.

« Wow, » the stunned « Up in the Air » star mouthed while throwing up his hands as Roberts walked over to the microphone at the Kennedy Center Opera House.

« What? This old thing? » the « Pretty Woman » star deadpanned as the audience laughed and applauded.

« I’m here for Gladys Knight, can’t you tell? » she added jokingly, referring to the 78-year-old singer, who was also a honoree at the gala.

Roberts’ black custom Jeremy Scott for Moschino dress featured gold-framed images of Clooney throughout the years including a cast photo from his time starring in the hit medical drama « E.R., » a portrait of the actor accepting the Cecil B. DeMille Award at the 2015 Golden Globes and candid snaps of the two A-listers together.

During her speech, the Georgia-native praised Clooney, who she described as a « renaissance man. »

« One who has wide interests and excels in many fields, » she noted. « Now, to be a renaissance man, it is said one must possess these six characteristics: to be knowledgeable, artistic, physical, intelligent, social and cool. »

The 55-year-old actress was decked out in a gown plastered with photos of the 61-year-old actor when she took the stage at the ceremony honoring Clooney in Washington D.C., on Dec. 4.
(Gail Schulman/CBS via Getty Images)

Roberts’ funny and heartfelt tribute was characteristic of the playful camaraderie between the pair, who have shared an off-screen friendship and on-screen partnership for over 20 years.

The two have made six movies together which, buoyed by their sparkling chemistry, have raked in a total box office haul topping $1 billion.

Clooney and Roberts’ latest collaboration, « Ticket to Paradise, » premiered in September and has grossed over $170 million worldwide since its release. The Oscar-winners starred as warring exes who join forces to sabotage their daughter’s wedding, rekindling their own romance along the way.

Prior to the film’s release, Roberts and Clooney embarked on a months-long press tour to promote the movie and often discussed their longtime friendship.

Here’s a look back at some of the best anecdotes that they have shared over the past year which explain why they are the perfect team both on-screen and off.

The two have made six movies together which, buoyed by their sparkling chemistry, have raked in a total box office haul topping $1 billion.
(Photo by Tommaso Boddi/Getty Images )

In a January interview with Deadline, Clooney, 61, revealed that he only agreed to star in « Ticket to Paradise » if Roberts also signed onto the project.

« In this one Julia and I just get to be mean to each other in the funniest way, and the minute I read it I called Julia, and I said, ‘Did you get this?’ and she said, ‘Yeah,’ and I said ‘Are you going to do it?’ and she goes, ‘Are you going to do it? And I said, ‘Yeah, if you do it.’ So, it was just one of those very lucky things, » Clooney said.

In a September interview with the New York Times, Roberts revealed that the feeling was mutual. Though the actress rose to fame starring in beloved romantic comedies including « Pretty Woman » and « My Best Friend’s Wedding, » she had avoided the genre for more than two decades. However, Clooney’s participation in « Ticket to Paradise » sealed the deal.

« Even with [‘Ticket to Paradise’], I thought, ‘Well, disaster, because this only works if it’s George Clooney.’ Lo and behold, George felt it only worked with me. Somehow we were both able to do it, and off we went, » she told the outlet.

She shared another reason why she couldn’t resist taking on the role in a September interview with The AU Review.

« Just the chance to be really snarky to George jumped out at me, » Roberts said with a laugh. « Just to see him so pathetically in love with me. »

The duo on their first meeting and their instant bond

During a joint appearance with Clooney on « Jimmy Kimmel Live! » in October, Roberts said that she knew the two would share a lifelong connection from the first time they met.

« We became instant friends, » Roberts said. « You know, you just meet people, and sometimes you think, ‘I really don’t like that person. I have no reason to not like them. I just don’t like them and I will never change my mind.’

« Then there’s some people that you meet, like my GTC [George Timothy Clooney], who you go, ‘OK, I’m going to know this person until the end of time. This is a good one.' »

Clooney has said that he also immediately bonded with Roberts.

« The minute we met, we had fun, » Clooney told People magazine in October. « The beauty is, when you work with people who take their work seriously and don’t take themselves seriously, and that’s really fun. »

Clooney is a known prankster and the pair’s relationship fittingly began with a practical joke. When « The Tender Bar » actor was courting Roberts to star in « Ocean’s 11, » he sent her the script with a $20 bill, after it had been reported that she was making $20 million a picture at the time.

In a January interview, Clooney, 61, revealed that he only agreed to star in « Ticket to Paradise » if Roberts also signed onto the project.
(Mike Marsland/WireImage)

In their interview with Kimmel, the two recounted stories from their time shooting « Ocean’s Eleven » in Las Vegas, including one hilarious prank that they pulled on Clooney’s close friend, Richard Kind, when he visited them at the Bellagio Hotel.

The pair told Kimmel that they were having cocktails with Kind and members of the « Ocean’s Eleven » cast, including Matt Damon and Brad Pitt, were in one of their hotel rooms when the « Curb Your Enthusiasm » star fell asleep in a rollaway bed.

Clooney recalled that the group then wheeled the bed that Kind was sleeping on into the middle of the casino and left him there.

« There were a lot of like, old ladies with that thing, » Clooney said as he mimicked pulling the handle of a slot machine. « Like, ‘What the hell’s that guy [doing]? »

In October, Clooney pranked Roberts during an appearance on Extra. As the Kentucky-native took his seat for the interview, he told host Billy Bush that the actress « has a side » that she prefers to sit on. He then slid over to the chair next to him.

« Watch the reaction, » he told Bush with glee as Roberts walked in. « George! » she exclaimed.

« What? Am I on the wrong side? » he asked. Roberts proceeded to sit down on Clooney’s lap as he laughed and moved back to his original seat.

Roberts’ and Clooney’s wife Amal on their close family Ties

Over the years, the pair have shared stories about the close bond that they have built between their families. In a 2016 interview with People magazine, Roberts told the outlet that she and Clooney have « just stitched their lives together. »

« All these people that come into our lives; my husband, my children, his wife Amal Clooney. We just keep stitching our lives closer together, » she said.

In September, Amal spoke of her family’s close bond with Roberts as she remembered how they spent a few months together in Australia while filming « Ticket to Paradise. »

EMMA ROBERTS ON AUNT JULIA ROBERTS, NOT FEELING PRESSURE TO MATCH HER CAREER: ‘I NEVER ASPIRED TO BE HER’

« She’s so wonderful with our kids, who call her ‘Auntie JuJu’, » Amal told Gayle King during an appearance with her husband on CBS Mornings.

In September, Amal spoke of her family’s close bond with Roberts as she remembered how they spent a few months together in Australia while filming « Ticket to Paradise. »
(Samir Hussein/WireImage)

« We spent a lot of time together, » Amal continued. « It was wonderful. »

Roberts also discussed their time in Australia during an interview with Variety. « The Clooneys saved me from complete loneliness and despair, » she told the outlet.

« We were in a bubble, and it’s the longest I’ve ever been away from my family. I don’t think I’ve spent that much time by myself since I was 25. »

Roberts and Clooney on why their relationship never turned romantic

Earlier this month, Clooney shared his thoughts on why he and Roberts never took their friendship to « a different level. »

« And we were fast friends right away. So it was nothing, but it’s been nothing but fun for us. So, I don’t think that was ever really a thing. »

However, the two admitted that their close friendship made their kissing scenes in « Ticket to Paradise » uncomfortable to film on some occasions.

In an October interview on the Today show, host Hoda Kotb asked Roberts and Clooney if it was ever awkward to kiss « your dear, dear friend. »

Earlier this month, Clooney shared his thoughts on why he and Roberts never took their friendship to « a different level. »
(Mike Marsland)

« It is when my wife and kids come by to visit, » « The Facts of Life » alum said as he turned to Roberts and smiled.

« It’s really bad, » Clooney said. « ‘What are you doing, Papa? What is that?' » Kotb went on to ask the pair if they ever laughed during their kiss scenes.

« It’s kind of ridiculous, » Roberts admitted. »It is like kissing your best friend. » However, Clooney appeared to take offense at her response, joking, « Well, thanks for that! »

In a 2016 interview, Roberts said that she and Clooney have « just stitched their lives together. »
(Stephane Cardinale – Corbis/Corbis via Getty Images)

Though their relationship never turned romantic, the pair recently said that they « openly love each other. »

« We have had a very funny relationship over the years, » Clooney said on the red carpet at the « Ticket to Paradise » premiere.

« I could make a lot of jokes, but the truth is that my family and my wife and my kids and Julia and her family — they’re family. That’s the truth. »

During an interview with People in October, Roberts and Clooney reflected on why they have stayed close for more than 22 years.

« I think we enjoy the same things. We love the work, but we don’t make the work our entire life, » Clooney told the outlet.

« It makes going to work really fun. It’s very easy for us, » Roberts noted. « We have a similar approach to life. »

« Listen, the thing about Julia, one of the many great qualities, is she is consistent in her loyalty and in her friendship and in her kindness, » the actor said.

« So if you’d ask me what’s different, I’d say that with the exception of us getting a little bit older, nothing in terms of who we are, or who you are. »

Ashley Hume is an entertainment writer for Fox News Digital. Story tips can be sent to ashley.hume@fox.com and on Twitter: @ashleyhume 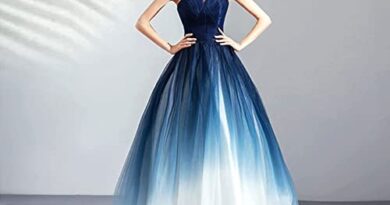 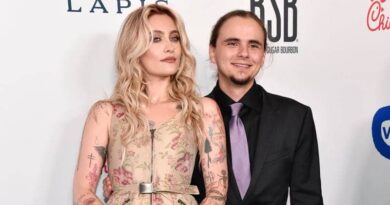 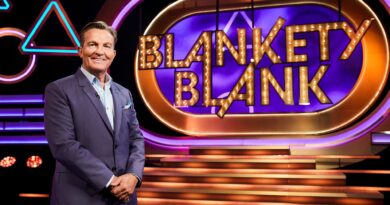