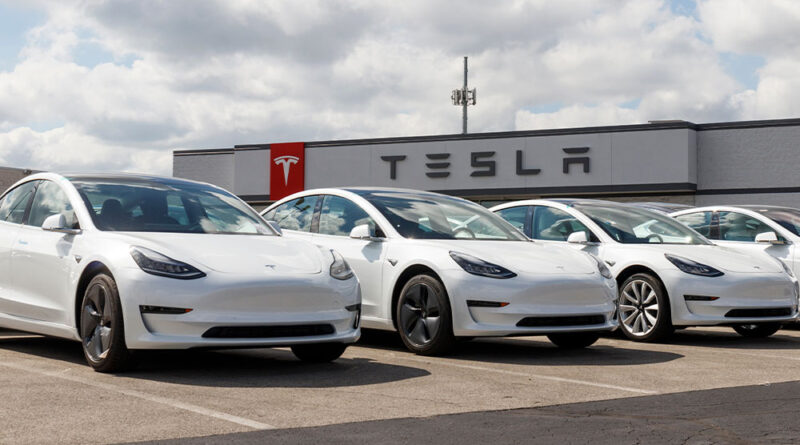 
Tesla stock fell solidly as deliveries easily hit a record in the third quarter, but far below estimates. China EV rivals also reported sales, with giant BYD (BYDDF) clearing yet another milestone and extending its lead over Tesla.

The major indexes fell solidly last week, capping a terrible September. The S&P 500 index and Dow Jones are at bear market lows, with the Nasdaq on the verge of doing so. Treasury yields backed off from 4%, but extended their weekly win streak.

Investors should be extremely cautious in the current environment, as the bear market appears to be starting a third leg down.

Tesla deliveries came in at 343,830 in the third quarter, up 42% vs. a year earlier and 35% above Q2’s 254,695, when the Shanghai plant faced a lengthy shutdown and slow recovery due to Covid lockdowns. The Q3 figure comfortably topped Q1’s record Tesla delivery figure of 310,048.

However, Tesla deliveries came in well shy of the 355,000-365,000 that analysts expected. Tesla blamed logistical issues, but the report will reinforce China demand concerns.

BYD and Nio are leading a China EV push into Europe. That’s just part of a massive international expansion for BYD.

Nio stock, as well as shares of BYD, Li Auto and Xpeng, all are struggling. Nio edged higher early Monday while Li and XPeng edged lower.

Along with Tesla stock, Arista Networks (ANET), Enphase Energy (ENPH), On Semiconductor (ON) and Celsius Holdings (CELH) all have relative strength lines at or near highs, but with the stocks trading below their 50-day lines. But, there is an upside to that technical flaw.

ENPH stock, On Semiconductor and Celsius are on the IBD 50. Enphase, Arista Networks and ON stock are on the IBD Big Cap 20. ANET stock was Friday’s IBD Stock Of The Day.

The video embedded in the article discussed the bear market action in depth, while also analyzing Arista Networks, Wolfspeed (WOLF) and Tesla stock.

The 10-year Treasury yield tumbled 9 basis points to 3.71%. The falling yield appears to be boosting futures.

U.K. Prime Minister Liz Truss scrapped a push to eliminate a 45% top tax rate due to opposition from many members of her Conservative Party. Truss’ deficit-funded budget triggered sharp sell-offs in the British pound and bonds, spurring the Bank of England last week to reverse course and start buying U.K. debt again.

Crude oil futures jumped  more than 4%. OPEC and key allies could cut production quotas by at least 1 million barrels a day at Wednesday’s OPEC+ meeting to support crude oil prices. Last month, OPEC+ cut quotas by 100,000 barrels per day. That was largely symbolic, because many members, including Russia, weren’t reaching their quotas.

On Monday, the Institute for Supply Management will release its September manufacturing index at 10 a.m. ET. The Labor Department’s September jobs report is due Friday at 8:30 a.m.

Remember that overnight action in Dow futures and elsewhere doesn’t necessarily translate into actual trading in the next regular stock market session.

The major indexes tried to bounce at various points this past week, but ultimately fell solidly for the week, right at bear market lows.

The overall 343,830 figure is a relatively modest increase from Q1’s record, given that Tesla has added new plants in Berlin and Austin and ramped up capacity at its huge Shanghai facility.

The Q3 delivery miss was not a matter of limited supply. Production significantly exceeded deliveries, with Tesla making 365,923 vehicles in the latest quarter.

Tesla in its press release cited « an increase in cars in transit at the end of the quarter, » suggesting that was the reason for the delivery figure.

But the report comes amid growing signs of weaker China demand, or at least demand not keeping up with a newly expanded Shanghai plant.

Tesla is extending a big insurance subsidy in China, introduced in mid-September, through year-end. It’s possible that Tesla will lower China vehicle prices in October.

One option for Tesla is to export even more vehicles from Shanghai, and there are indications that it’s already doing so.  Shanghai may have switched production to exports a few days earlier in September, likely due to weaker local demand. That could be the reason for more cars « in transit. »

Keep in mind that Q4 production should be much higher than in Q3, especially for the broader Eurasian market. So demand will need to ramp up as well.

The China EV market is incredibly competitive, and only growing more so.

On Friday night, Tesla (TSLA) unveiled a prototype of the Optimus robot. But Optimus had limited mobility, indicating that Tesla is many years, if not decades, behind what other robotics firms can do.

CEO Elon Musk has said Optimus could eventually replace factory workers. He claims Optimus will be sold in 3-5 years and cost less than $20,000. Many experts say a useful, general-purpose humanoid robot is decades away from reality.

Tesla stock fell 5% before Monday’s open, signaling a drop to the lowest levels since late July.

Shares fell 3.7% to 265.25 for the week. TSLA stock hit resistance at its 50-day line on Wednesday, tumbling to undercut recent lows Friday. The bottoming or first-stage base now has a double-bottom pattern, with a 313.90 buy point.

BYD has entered Australia, New Zealand, Singapore and India in the past several weeks, with deliveries starting in Europe and several other Asian nations in the next few months. The automaker also keeps adding new models, beginning deliveries of the Model 3 rival Seal in late August.

With new models and a Europe expansion, Nio expects record deliveries in every month of the fourth quarter.

Nio stock fell 10.6% this past week to 15.77, hitting a four-month low after hitting resistance at the 200-day line on Sept. 30. LI stock, a huge winner from early May to late June, has plunged to four-month lows as well, down 8% last week. XPEV stock lost 12.8% last week to fresh record lows.

BYD stock has struggled ever since Warren Buffett’s Berkshire Hathaway (BRKB) sold a sliver of its longtime holdings. BYDDF sank 6.25% in the past week, hitting six-month lows.

BYD, which trades over the counter in the U.S., was not yet active.

Tesla Vs. BYD: Which EV Giant Is The Better Buy?

ANET stock is working on a base within a long consolidation, with a possible 132.97 buy point. There’s a trendline entry that’s slightly above the 50-day and 200-day lines, but for now it’s hitting resistance at a sliding 21-day average. Still, Arista stock rose 2.7% to 112.89 for the week. The RS line is at a record high.

ENPH stock dipped 0.7% to 277.47 last week, trading around its fast-rising 50-day line, closing below it on Friday. The solar power leader arguably could have an entry from a decisive move above its 50-day and 21-day lines, though a longer pause would be helpful.

CELH stock broke hard below its 50-day line on Sept. 22. The ongoing recovery has been lackluster, but the energy drink maker did climb 2.4% for the week. A decisive move above the 50-day line would likely coincide with a downward-sloping trendline, offering an early entry in an emerging new consolidation.

ON stock also decisively broke its 50-day on Sept. 22, and hasn’t made much of a bounce, falling 1.55% last week. The EV-focused chipmaker could have an early entry from reclaiming the 50-day line and a trendline.

All of these stocks, including Tesla, need to get back above their 50-day lines. But that’s actually a positive in the current bear market. If Onsemi stock and these others are going to make that charge above key resistance, the overall market will likely need to show some more strength.

There are a few stocks that are actionable now, such as Vertex Pharmaceuticals (VRTX), but that’s without any clear signs of a market bottom.

The bear market didn’t plunge as it did in the prior two weeks, but the major indexes fell solidly once again, with much of the decline coming Friday. The S&P 500 and Dow Jones have broken below their June lows, doing so again Friday. The Nasdaq and Russell 2000 have yet to undercut their bear market lows, but are getting very close. The Nasdaq 100 did undercut its June lows on Friday, with Apple (AAPL) and Tesla stock among the many big-cap drags.

Bulls tried to put up a fight several times during the week, but rebounds quickly fizzled. Wednesday’s strong gains were quickly erased Thursday.

The Nasdaq tried to bounce again Friday, rising almost 1.4% at session highs, before reversing lower. It’s not a coincidence that Friday’s bounce fizzled as the 10-year Treasury yield reversed higher from early losses.

It’s hard to see the market making a serious rebound with Treasury yields trending higher. And yields will likely trend higher as long as the Federal Reserve is raising rates aggressively.

In addition to the hawkish Fed, rising Treasury yields and soaring dollar, investors have to watch for earnings disappointments amid a very tough business environment. Nike (NKE) and Carnival Corp. (CCL) are just the latest examples, with earnings season starting in just a couple of weeks.

Bottom line, the bear market appears to be in the process of starting a third leg down. If so, the next logical support area might be the February 2020 pre-Covid high.

What To Do Now

The bear market is right at lows. Investors should be all or nearly all in cash right now. If you want to nibble on some stocks flashing buy signals, keep the positions small and be ready to take quick profits.

Build up your watchlists so you’ll be ready to jump into the big winners in the next true bull market. Focus on relative strength leaders. Many, such as Arista Networks, Enphase and Tesla, may be below their 50-day lines.

Read The Big Picture every day to stay in sync with the market direction and leading stocks and sectors.

Catch The Next Big Winning Stock With MarketSmith 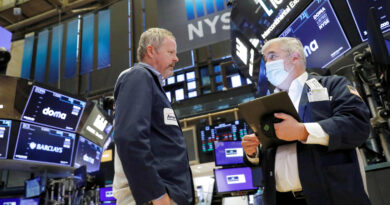 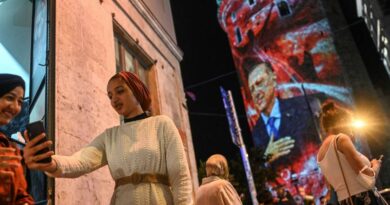